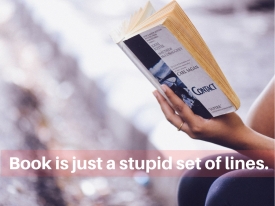 A Book is just a stupid set of lines. Nobody can really understand anything.

People read and make a meaning out of it to their understanding or the extent that suits them.

A book is a part of someone else’s life that they’ve left for others as they’ve already lived it. They either want to share that part with you or throw it away far from them like an amputated arm.

Only with the writer’s state of mind, their circumstances can we understand the true meaning of his lines, by not just reading a language but living the emotions. But is that possible? To have that state of mind to read between the lines. The metaphors, the words can all be a lie, a deceiving trickery by the author or may have a deeper meaning than we can ever imagine or grasp.

But we all love to read, to at least grasp the macro idea of it while trying and looking for something meaningful relevant to us in some way.